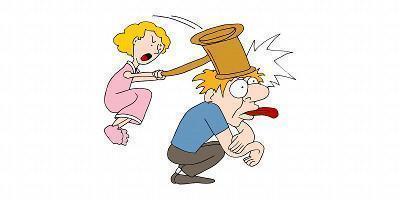 These Boots Are Made For Walkin'

I always wanted a pair of real cowboy boots. So I found a pair on sale and wore them home. Walking in the kitchen I asked my wife: "Notice anything different about me?" She looked up and said: "Nope."

So I figured how to fix that. I went into the bathroom, undressed and walked back into the kitchen completely naked except for the boots. Again I asked her: "Notice anything different now?"  This time she slowly looked me up and down, then said: "What's different? It's hanging down today, it was hanging down yesterday and it'll be hanging down again tomorrow!"

Now I was really mad so I told her: "You know why it's hanging down. 'Cause it's lookin' at my new boots!" Without missing a beat she said" "Then you shoulda bought a hat."

A husband comes home from work one night and his wife asks him if he could fix the washing machine. He looked at her and said: "What do I look like, the Maytag repair man?" Then he grabbed a beer and plopped down on the couch.

The next night he came home from work and his wife asked him if he could fix the car. He looked at her again and said: "What do I look like, Mr. Goodwrench?" And to the couch he went, beer in hand.

On the third night he gets home and the wife tells him: "Honey, you know that nice Mr. Johnson next door? Well today he came by and fixed the washing machine. Then he checked out the car, did a little work on that, and now it's running perfectly."

The husband rolls his eyes and says: "Great. How much did that cost?"

The husband asked: "So what kind of cake did you bake him?"

And the wife shot back: "What do I lool like, Betty Crocker?"

The other night I was having sex with my wife when my cell phone rang. I answered it and said: "Can I call you back? I'm in the tub."

You Learn Something New Everyday

I was scewing my wife when suddenly I stopped and didn't move. She asked: "What are you doing?"