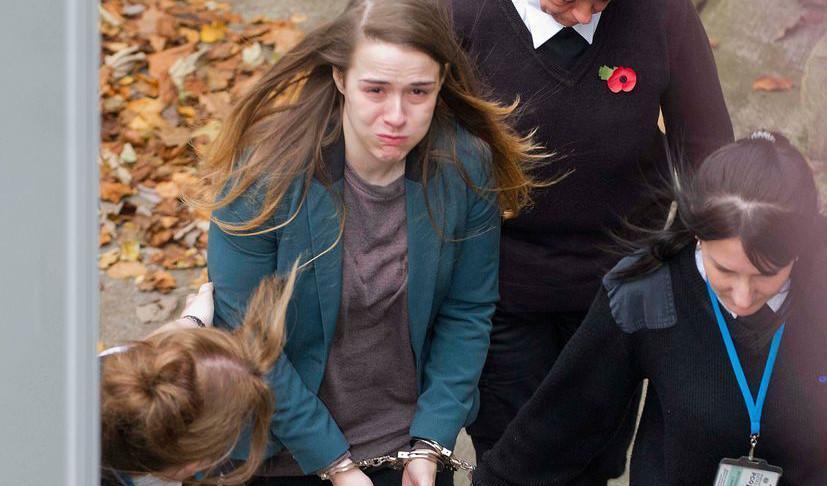 #WTF?! Gayle Newland, who tricked her female friend into sex using a fake penis, was sentenced to jail for eight years. One year for every inch of that fake Johnson... but who's counting.

Newland, 25, concocted the online male persona of Kye Fortune to seduce her victim - before convincing her to wear a blindfold whenever they were together.

The victim claimed she never suspected her friend Gayle and “boyfriend” Kye were the same person, until she ripped off her blindfold during sex and discovered “the evil truth” in June 2013.

Newland, of Hooton Road in Willaston, Neston, was convicted of three counts of sexual assault by a jury at Chester Crown Court on September 15.

Lawyers involved in the trial told the ECHO it was the strangest case they had dealt with “by some way” while Judge Roger Dutton described it as “extraordinary” in his legal directions to the jury.

Speaking in court, the victim said: “It may look ridiculous, I had no idea, I was desperate for love. I wasn’t closing my eyes to what was happening, I wouldn’t have gone along with it.”

Throughout the case, Newland always accepted she had a sexual relationship with the woman, but claimed her accuser knew “from the word go” that Kye Fortune was make-believe.

She claimed the persona was part of a “role play” and that her victim wanted her to act as a man because she was awkward about her sexuality.

The victim first came into contact with Newland, hiding behind the persona of Kye Fortune, on Facebook in 2011 and the pair became a couple.

The court heard former creative writing student Newland devised an intricate back story to the character of Kye, and admitted first using the fake profile when she was 13 as a way of talking to girls.

The victim said over the next year Kye would make excuses as to why they could not meet, claiming he had suffered from cancer and was involved in a car crash, and that the treatment had left him embarrassed about his body.

As their relationship progressed, Kye suggested the victim meet “his friend” Gayle Newland.

The court heard the victim would hold long conversations with Kye before calling another number to talk to Newland, unaware she was speaking to the same person using different mobile phones.

Kye eventually agreed to meet the victim, under strict “rules” that she must wear a blindfold and a mask at all times.

The court heard the pair would lie on Newland’s bed watching television, even though the victim was wearing a mask and could not see the screen.

The final time they had sex, on June 30, 2013, the victim claimed she removed her blindfold to find Newland sat on her bed.

She told police officers in interview: “Something just didn’t feel right, so I sat up on the bed. Something in my mind said pull it (the blindfold) off, pull it off.

“I pulled it off and Gayle was standing their with a strap-on prosthetic penis. I just couldn’t believe it.”

(This crazy story courtesy of liverpoolecho.co.uk)

Difference between a friend & a real friend?

Why can't blondes parallel park? 'Cause guys keep telling them that 4 inches is really 8 inches.

Let The Force Be With You

If you force a prostitute to screw you, is it rape or shoplifting?