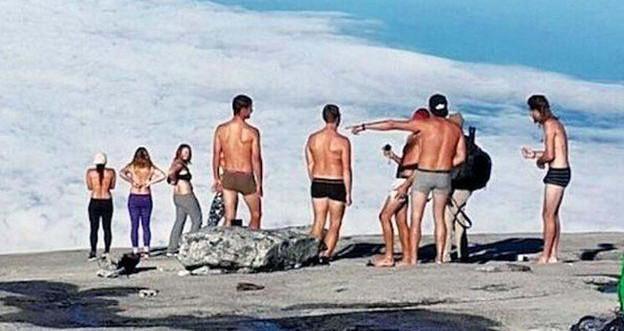 #WTF?! A British woman jailed in Malaysia for taking her clothes off on a mountain has returned home. Or as Frank Zappa might advise: "Don't fuck with the mountain, don't fuck around!" In this case rather sacred mountain.

Eleanor Hawkins, 23, from Derbyshire, was one of 10 people who stripped before taking photographs at the peak of Mount Kinabalu on 30 May. Four of them - including Ms Hawkins - got three-day prison sentences for "committing an obscene act in public".

The Telegraph reports she was ushered off her flight by security staff at Heathrow shortly after touching down.

Her prison sentence was back-dated to reflect time already served and she was also fined 5,000 Malaysian ringgit (£860/$1,330) on Friday.

Ms Hawkins has said her behaviour on the mountain - which is considered sacred - was "stupid and disrespectful".

Prosecutors said the 10 tourists climbed the peak on the island of Borneo to enjoy the sunrise and then challenged each other to take off their clothes and pose for photographs.

It caused widespread offence in the region, and Sabah state deputy chief minister Joseph Pairin Kitingan said their "disrespect to the sacred mountain" caused an earthquake.

The trio who were jailed alongside Ms Hawkins - Dutch national Dylan Snel, 23, and Canadian siblings Lindsey, 23, and Danielle Peterson, 22 - have all left Borneo.

What do you say to a woman who won't suck your dick?

A guy visiting his old friend for dinner one evening was very impressed by the way his buddy preceded every request to his wife with endearing terms such as: Honey, My Love, Darling, Sweetheart, etc. The couple had been married nearly 50 years and, clearly, they were still very much in love.

While the wife was in the kitchen, the guest leaned over to his host and commented: "I think it's wonderful that after all these years, you still call your wife those loving pet names."

The old man hung his head and sighed: "I have to tell you the truth. Her name slipped my mind about 10 years ago and I'm scared shit to ask the old bitch what it is..."

I'll Drink To That

There's a huge five-alarm fire at the local bar and trucks are dispatched from every station. When it's finally under control, one of the chiefs walks in and finds two Irish guys drinking at the bar. The chief says, "I can't believe you guys were in here the whole time. How'd the fire start?"

One of the Irish guys says, "We have no idea. It was burning when we got here."