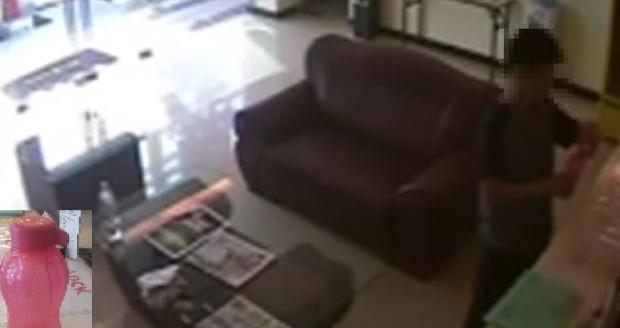 #WTF?! Guys whacks off in co-worker's water bottle, video goes viral, gets arrested. What did he expect? A raise? Community Policing (CP) members chased down and arrested a man who is believed to have masturbated and ejaculated into a hotel staff's water bottle as seen in a viral video.

The citizen arrest team and Puchong Jaya policemen cornered the 29-year-old man at about 11pm Friday while he was leaving a restaurant here where he works as a chef.

"Who knows what unwanted things he has added into the dishes!" said CP Malaysia founder Kuan Chee Heng, who led the arrest.

The man is alleged to have masturbated in the lobby of a Puchong hotel on April 22.

He was seen wandering around the lobby, fondling his crotch before taking a pink water bottle from the concierge counter and ejaculating into it.

He shook the bottle, placed it back and left the hotel, leaving the clerk who owns it to find a nasty taste when she drank from it minutes later.

Serdang OCPD Asst Comm Razimi Ahmad said the clerk lodged a report with the police after the incident.

Investigations from the closed circuit television (CCTV) footage led Kuan and his team to arrest the man outside his restaurant in Bandar Puteri Puchong.

As the man was about to get into his car, he was approached by the CP members prompting him to break into a sprint.

Little did he know that police officers were waiting for him and arrested him on the spot.

Kuan said that the suspect, who is unmarried, has a long history of sexual offences - having been arrested twice in Dang Wangi and The Curve shopping mall for hiding in women's toilets to spy on ladies.

"Looks like his old habits never change. I asked him why he had to do that to the woman's bottle. You know what he said? 'I cannot tahan'," Kuan told The Star.

The suspect was brought to the Puchong Jaya police station for further questioning early Saturday morning.

No Pain? Game On!

Husband says to his wife, "Here's 2 aspirin & a glass of water for your headache."

"I don't have a headache." His wife tells him

Do You Not Have Any Shame?

So I went to the doctor for a physical and he told me I should stop jerking off. I asked him why should I stop?

He told me: "Because you're at a physical."