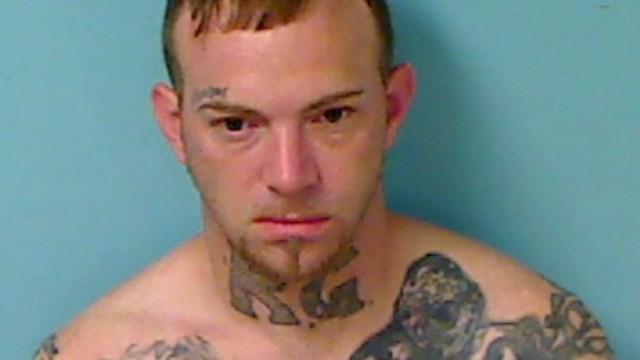 #WTF?! After an unclothed, alcohol-fueled night behind the wheel, naked couple arrested in Westlake. From their birthday suit to a prison jumpsuit... nice!

Police received a report of a naked male and female outside of a car in the parking lot of a business on Bassett Road, before 12:30 a.m. Saturday. When officers arrived, the pair were inside the car, driving on a treelawn along Crocker Road.

A patrol officer stopped the car. The driver, Alexandria Mauer, 24, was still completely nude, eating a slice of pizza and the passenger, Kenneth Gillespie, 33, also still undressed, was holding an open beer can between his feet.

Both were arrested and ordered to get dressed.

But the night didn't stop there.

Mauer was arrested for OVI (operating a vehicle while intoxicated) and refused a breath test. She was released two hours later to a sober family member.

However, by 3 a.m., she was found wandering Bradley Road -- with clothes on this time -- after arguing with her ride home and jumping out of the car.

She was arrested again for disorderly conduct while intoxicated.

In the meantime, Gillespie, who is also on probation for drug possession, proceeded to urinate in the back of the police cruiser. He was charged with disorderly conduct while intoxicated, open container and public indecency.

He only had underwear and a sweatshirt with him when we was arrested, so police gave him an old pair of jail uniform pants and jail shoes to wear home later that morning.

Be Nice Or You Won't Get Any

Little Johnny's walking along with his father when he sees a butterfly. He grabs it, throws it on the ground,and stomps on it. His father says, "Son, that was unnecessary violence. You may not have any butter for a month."

They walk a little further and Little Johnny sees a honey bee. He grabs it, throws it on the ground, and stomps on it. His father says, "Once again, son, unnecessary violence. You may not have any honey for a month."

That night, Little Johnny's having dinner with his mom and dad when a cockroach goes running across the table. His mother knocks it off the table and stomps on it. Little Johnny looks at his dad and says, "Well, Pop, are you gonna tell her, or should I?"

Depends on Which End You Are On

A little girl asked her mom: "When you and daddy have sex, who enjoys it more?"

Her mother thought for a moment and replied: "Sweetie, you know when you have an itch in your ear and you stick your finger in and wiggle it around to make it go away? Think about it... which feels better, your finger or your ear?"