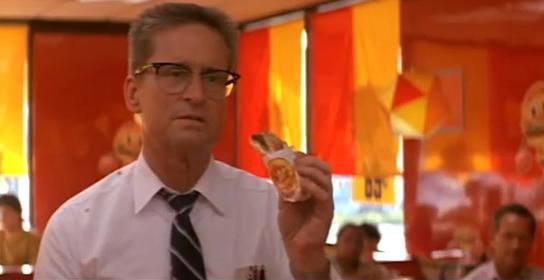 #WTF?! Man threatens to shoot gun in fast food restaurant mimicking movie scene. In the 1993 movie “Falling Down,” Michael Douglas plays a downtrodden divorcee who shoots a gun inside a fast-food restaurant after being told he can’t have breakfast because he’s too late.

Twenty-two years later, police say, a man in Manchester, Conn., was arrested for saying he wanted to recreate that scene after he was denied breakfast at Burger King.

Police said Gary Kuhn, 55, tried to order breakfast at 10:55 on Sunday morning and was informed that Burger King’s breakfast service ended at 10:30, according to the Hartford Courant.

“Have you ever seen the movie ‘Falling Down’ with Michael Douglas?” Kuhn asked the cashier, according to police. “It’s a movie you should watch.”

At that point, police said, Kuhn informed the cashier that film’s protagonist shoots up a fast-food joint after he’s denied breakfast.

“That’s what I feel like doing,” Kuhn added, before throwing a coupon at the cashier and exiting the restaurant, according to police.

Kuhn’s actions — as relayed by police to the Courant — bear only vague resemblance to his cinematic homage. In the film, Douglas’s disgruntled William Foster character removes a gun from a black leather bag and berates terrified employees before accidentally firing multiple rounds into the ceiling. Foster then eats a hamburger.

Police said Kuhn was not armed when he threatened the Burger King employees — and that he did not opt for the lunch menu after being told he couldn’t order breakfast.

When authorities eventually arrested Kuhn and asked him if he wanted to waive his right to remain silent, he replied that “he only wanted a sandwich; he was still hungry,” police spokesman Christopher Davis told the Courant.

Kuhn has been charged with first-degree “threatening” and second-degree breach of peace, police said.

(Story courtesy of the Washington Post. Of course don't forget to check out the memorable scene from "Falling Down".)

How To Really Tie One On

A string walks into a bar and orders a beer. The bartender says, "Sorry pal, we don't serve strings here."

So the string walks outside, ties himself in a loop and messes up the top of his hair. He walks back into the bar and orders a beer.

The bartender squints at him and says, "Hey, aren't you a string?"

Not Necessarily From The Bronx

What's the definition of a Yankee?

Same thing as a quickie only you do it yourself.

Cop pulls a guy over at 3am: "Where you going at this hour?"

Guy says: "To a lecture on alcohol abuse, its effect on the human body. And the dangers of smoking & staying out late."

"Really? Who's giving that lecture at this time of night?"