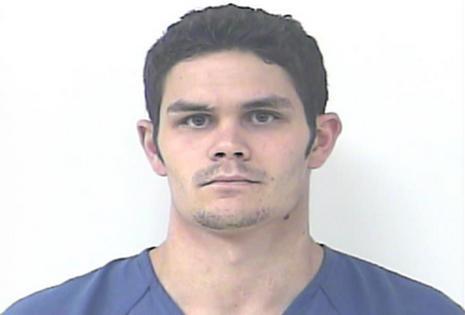 license was suspended last year and his auto insurance had been cancelled. Here's why... the guy's an idiot AND he doesn't know how to drive.

Miret began screaming at a patrolman, according to an arrest affidavit[1], and balled his fists up in an apparent attempt to intimidate the cop. Miret, seen above, was subsequently arrested and placed in the rear of a police cruiser, where he could be heard complaining about the faulty legal advice available on Wikipedia.

Charged with a pair of misdemeanors, Miret is scheduled for an April 11 arraignment hearing. He is free on $1125 bond....

Read more from our friends at The Smoking Gun http://thesmokinggun.com/buster/port-st-lucie/wikipedia-legal-fail-382097

Who I'm Voting For

Many people have been asking who I'm voting for in the next election. My answer:

"To tell you the truth, I'm never voting again...Because voting is like marriage, no matter who you choose, it turns out bad."

What Are You Doing Today?

Nude In Front Of The Mirror

My wife was standing nude, looking in the bedroom mirror. She wasn't happy with what she saw, so she said: "I feel horrible; I look old, fat and ugly. I really need you to pay me a compliment."

I told her: "Your eyesight's damn near perfect!"