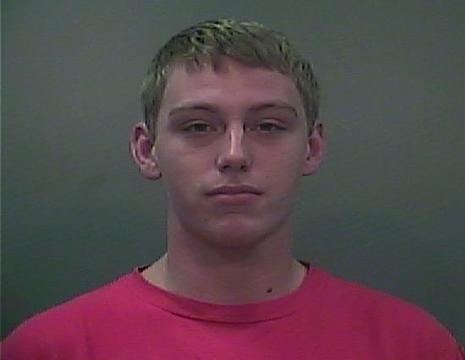 WTF?! A man booked into jail for public intoxication had a stolen gun hidden in a certain body cavity. Police noticed that the defendant was acting like an asshole and walking “strangely” upon arrival at the county jail. So they put two and two together and found the gun in cavity number 2,

Jesse Roberts, 23, was collared early today by cops responding to a 911 call about a prowler near a residence in Elkmont, Alabama a town outside Huntsville.

Seen above, Roberts was arrested and transported to the Limestone County jail, where corrections officers took notice of his odd gait. Is that a gun up your ass, or are you just not happy to be here?

As Roberts was being searched, an unloaded Jimenez Arms .380-caliber pistol fell from his rear end into his underwear. “I immediately considered that he defecated on himself before noticing a familiar shape in the form of a pistol in his boxers,” a jailer noted in a report[1], according to Sheriff Mike Blakely.

The defendant was heard to have said: "Oh crap!"

Upon recovering the unloaded weapon from Roberts’s drawers, cops determined that the $100 handgun had been reported stolen out of Florence, a city 50 miles away.

Along with a misdemeanor public intoxication rap, Roberts is facing charges for receiving stolen property, introducing contraband into a correctional facility, and carrying a concealed weapon[2] without a permit. Roberts is locked up in lieu of $7250 bail....

Read more from our friends at The Smoking Gun http://thesmokinggun.com/buster/alabama/gun-drops-into-boxers-829043

Staff Knows Better Than The Boss

One day the boss calls in the vice-president. "We're downsizing. We have to lay off either Jack or Barbara."

The VP tells him, "Barbara is my best worker, but Jack has a wife and three kids. I'm not sure what to do."

The next morning the VP is waiting and Barbara is the first to arrive. He tells her, "Barbara, I've got a problem. I've got to lay you or Jack off and I don't know what to do?"

An Italian guy Luigi goes up to his neighbor Tony and says, "Hey, Tony... lemme ax you a question. You like-a woman with-a big, sloppy tits, that droop-a down this-a far?" Tony says, "No."

Luigi says, "Then why you fuck-a my wife?"