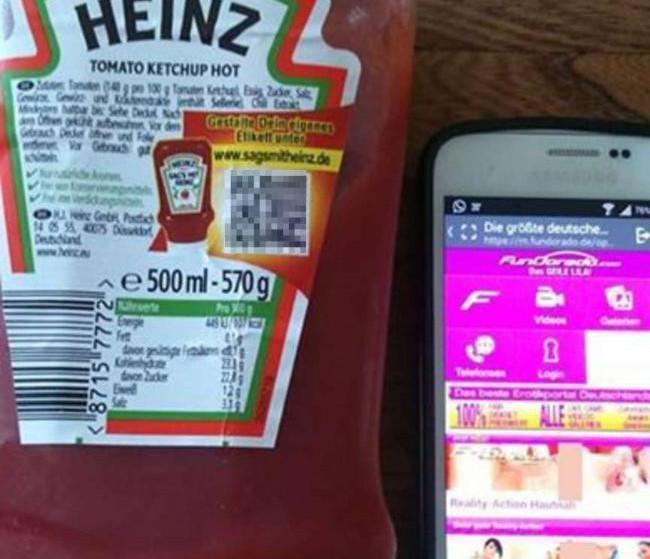 Korell was also offered a free custom-designed bottle for his trouble. "Even if the bottle was a leftover, it's still in lots of households," Korell said in a comment to UPI.

Heinz told Korell it would accept "suggestions for the implementation of future campaigns."

Here's one: You are a multi-billion dollar company. You care about your brand. Don't cheap out on a $10 domain name when you grow weary of your silly little promotion. Just sayin'.

Teacher: "What do you know about the Resurrection?"
Johnny: "If it lasts more than 4 hrs call your doctor."

A daughter asks her mother, "How many different kinds of dicks are there?”

The mother smiles and says, “Well, dear, a man goes through three phases in his life. In his 20s, his dick is like an oak tree, mighty and hard. In his 30s and 40s, it’s like a birch, flexible but reliable. After his 50s, it’s like a Christmas tree.”

“A Christmas tree?” the daughter asks. “Yes, dead from the root up and the balls are just for decoration.”

I think I got beat up pretty bad last night. I remember getting on the elevator at my office and running into this gorgeous secretary with big tits. I couldn't help staring at her while the elevator door closed, but didn't start up. She said: "Would you please press one?"

So I did. I don't remember much after that...