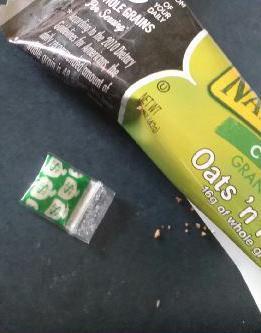 #WTF?! Police are investigating how a packet of cocaine ended up inside a Nature Valley granola bar. We'd like to know too... and also the location of the store where she bought it! So we can do some shopping next we're in San Antonio.

Cynthia Rodriguez of San Antonio says she was eating the bar when a small, green bag emblazoned with dollar signs fell out. Rodriguez contacted manufacturer General Mills Inc., thinking she had won a prize. Company officials told her to call the police.

Sgt. Javier Salazar says authorities are trying to determine how the package got inside the granola bar wrapper.

A General Mills spokesman said that the Minneapolis-based company is confident the cocaine wasn't packaged with the bar at a company facility. Mike Siemienas (suh-MEE'-nuhs) declined to say where the bar was produced.

What is the cheapest meat?

Deer balls, they're under a buck.

Put It On My Bill

Duck walks into a whorehouse, asks the madame: "If I pick out 1 of your whores will you put it on my bill?"

What do you do when you see your husband staggering in the back yard?