Man dies after sex with scarecrow 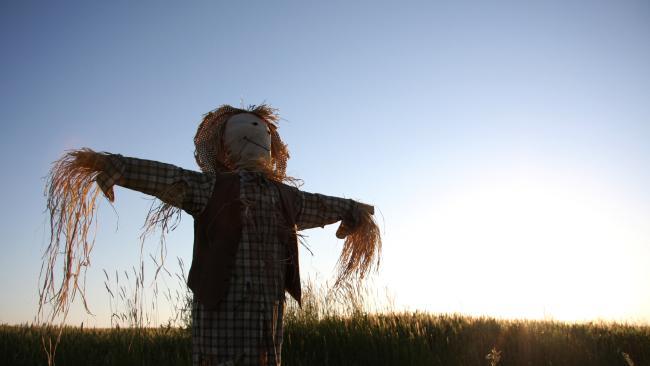 #WTF?! A sheperd was found dead after having sex with a scarecrow that he had put a wig and lipstick on.

Neighbours led police to the Argentinian man’s body after they rang the local council about a foul smell coming from Jose Alberto’s home in San Jose de Balcare. Police later found Alberto, 58, whose rotting remains were found next to the scarecrow. The scarecrow also had a strap-on sex toy attached to it.

“During a first visual inspection it appeared that there were two dead bodies. Then it was found that actually one of the bodies was a doll with special features,” prosecutor Rodolfo Moure told The Balcarce Journal. “It was lying next to the deceased and had a six-inch strap-on penis.”

Mr Moure said there were no signs of violence, or a robbery at the scene of the man’s death. “We are working on the assumption that the man died during sex with the scarecrow,” Mr Moure said. “Straw had been stuffed inside the old clothes that had been sewn together to make the scarecrow. “We are now waiting the results of an autopsy.”

It is understood the man lived alone and didn't have a mobile phone.

And The Moral of the Story Is...

One day the teacher asked the class to think of a story that has a moral that the class could learn something from. Little Suzy raised her hand to go first. "My dad owns a farm and every Sunday we load the chicken eggs in a basket, then put it in the back of the truck to drive to town and sell. One Sunday we hit a big bump and all the eggs flew out of the basket and landed on the road." When the teacher asked for the moral of the story, Suzy replied, "Don't put all your eggs in one basket."

Little Lucy went next. "My dad owns a farm too. Every weekend we take the chicken eggs and put them in the incubator. Last weekend only eight of the 12 eggs hatched." Again, the teacher asked for the moral of the story. Lucy replied, "Don't count your chickens before they're hatched."

Next up was Little Johnny. "My uncle Ted fought in the war, and his plane was shot down over enemy territory. He jumped out before it crashed, but he could only grab a case of beer, a machine gun and his survival knife. On the way down, he drank the case of beer. He end up landing right in the middle of 100 enemy soldiers. So he pulled out his machine gun and managed to shoot 60 of them until he ran out of ammo! Then he pulled out his survival knife and killed 30 more. But the blade snapped off, so he had to kill the last ten with his bare hands."

The teacher looked a little shocked. After clearing her throat, she asked what possible moral there could be to this story. "Well," Little Johnny replied, "Don't fuck with Uncle Ted when he's been drinking."

Gal to salesman: "Should I buy a sweatshirt or a windbreaker?"

Jake the farmer has an incredibly nagging wife. One day he's out in the field, she brings his lunch to him, and then sits there and berates him while he's eating. Suddenly, the mule kicks up his back legs, smacking her in the head, and it kills her instantly.

Jake says, "The women all say how nice she looks, and how pretty her dress is. The men all say, Is that mule for sale?'"