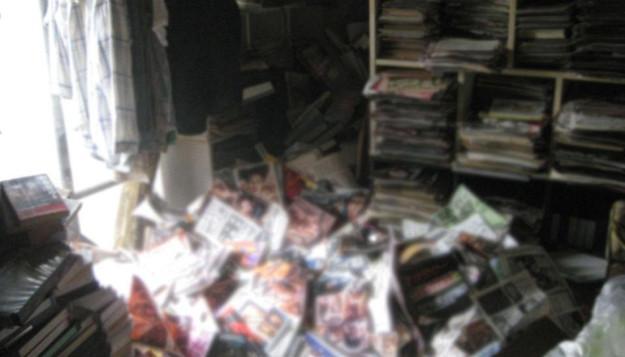 When the crew arrived at the home of a renter who had failed to pay his landlord, they found the 6-month dead body lying in the glossy rubble. It was unclear if Mr. Joji had suffered a heart attack and fallen into the stacks of magazines which had then fallen on top of him, or whether he had been crushed by the mass of paper. In any case the cleaner said that if he was still conscious, the paper would probably have muffled his cries. The burning question: Were his muffled cries muted by pictures of a sex slave sporting a ball gag. Irony!

Turns out every space in the flat was filled with piles of magazines, which were stacked on the floor, tables and shelves. Not even room for a box of tissues or a bottle of lotion. So sad. And so the final X in this X-rated drama is to cross out Joji from the list if the living.

Mothers take notice: if your teenage son's bed begins to slowly rise it may be time to clean out what he's hiding underneath before it's too late.

Read more from the Daily Mail

Let There Be Light

How many Irishmen does it take to change a light bulb?

One night a little girl walks in on her parents having sex. The mother is going up and down on the father and when she sees her daughter looking at them she immediately stops. “What are you doing, Mommy?” The mother, too embarassed to tell her little girl about sex, makes up an answer. “Well, sweetie, sometimes daddy’s tummy gets too big so I have to jump up and down on it to flatten it out.”

The little girl looks at mom and says, “Well, mommy you're really wasting your time.” The mother is confused so she asks, “Why do you say that sweetheart?”

The little girl answers, “Because mommy, when you leave for work in the morning, the lady next door comes over and blows it back up.”

If my son farts or has his hands down his pants, my wife smiles and says, “Like father, like son!”

Yesterday we caught him screwing the neighbor, but for some reason it wasn’t so funny when I said it.