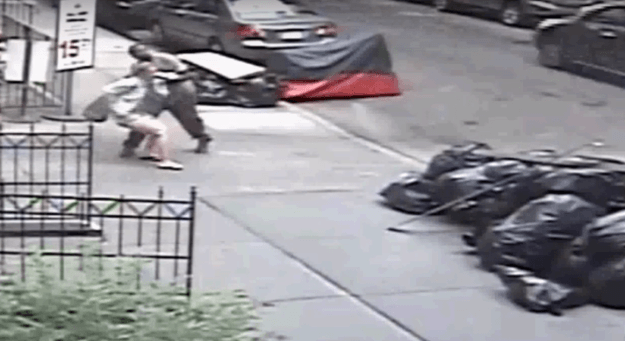 According to police, an unidentified man was caught on camera accosting a woman from behind – before stuffing a bag of human feces down her pants. Oh crap... literally.

Police say the victim, a 27-year-old woman, was walking down East 74th Street near First Avenue around 6 p.m. on Monday when she was approached from behind by the suspect.

As captured on a nearby surveillance camera, the man is seen following the woman for a short time as she walked along the street in front of him talking to someone on her phone.

He then, according to police, grabbed the woman around the waist and forced a bag of what was later identified as feces down the back of her pants.

Police say the man also squeezed the woman’s buttocks before she was able to squirm away. He is then seen removing a pair of latex gloves he was wearing before fleeing on foot.

The suspect is described as about 40 years old, six feet tall and 200 pounds with an afro-style haircut.

Anyone with information about the man’s identity is urged to contact the NYPD.

Morris walks into a doctor's office and says, "Doc, you gotta help me. I've got a constant erection. At first it was fun, but then it became painful and embarrassing."

He takes down his pants, and his hardon is sticking straight out. The doctor looks at it for a minute, then whacks it with two fingers. A little bug jumps off, scurries away and just like that the hardon goes right down.

The doctor says, "Help me find that bug and you don't owe me a thing."

Three men died on Christmas Eve and were met by Saint Peter at the pearly gates. "In honor of this holy season," Saint Peter said, "you must each possess something that symbolizes Christmas to get into heaven."

The first man fumbled through his pockets and pulled out a lighter. He flicked it on. It represents a candle, he said. You may pass through the pearly gates Saint Peter replied.

The second man reached into his pocket and pulled out a set of keys. He shook them and said, "They're bells" . Saint Peter said you may pass through the pearly gates.

The third man started searching desperately through his pockets and finally pulled out a pair of women's panties. St. Peter looked at the man with a raised eyebrow and asked, "And just what do those symbolize?"

The man replied, "They're Carol's".

Where does a one-legged waitress work?